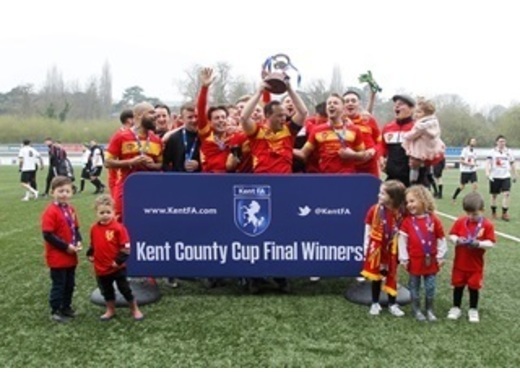 The Kent Football Association have confirmed that the three Kent Sunday Cup competitions have been cancelled for the 2020/21 season. Following a board meeting last week it was decided not to commence with this seasons competitions, which include the Kent Sunday Premier Cup, Kent Sunday Junior Cup and Kent Sunday Junior Trophy, but did announce that there are plans to resume last years competitions at some stage which is great news for Division One side South Willesborough, who had reached the semi finals of the Junior Trophy before last season was brought to a halt due to the COVID-19 pandemic.

The decision to cancel this seasons competitions was made to support the local league programmes as some Sunday Leagues across the county are expected to have a delayed start, even though the Ashford & District Sunday Football League plans to kick off on Sunday 13th September, one week later than usual. The potential of a second wave of coronavirus and a possible further lockdown also influenced the decision to allow local leagues the best chance of completing their own league season. The Kent FA had offered free entry to all clubs this season, and they have already confirmed that the incentive will be honoured for the 2021/22 season instead.

Although this news is disappointing for the majority of teams, one club who will benefit will be South Willesborough FC who have been informed that they will get the chance to resume their successful Kent Sunday Junior Trophy campaign from last season. The Kent FA have committed to completing last seasons county cups to recognise the clubs who had worked hard to reach the later stages of the competition before the season was suspended, and experience the full match-day experience of a county cup final. South Willesborough will now travel to face Royal Southwark FC from the Orpington & Bromley Sunday League in the semi finals, and hope to make it through to the final where they could take on Sixteen-A FC from Sittingbourne who made it through winning their semi-final back in March beating Herne United 4-2. Dates for these rearranged fixtures are to be announced later in the year.