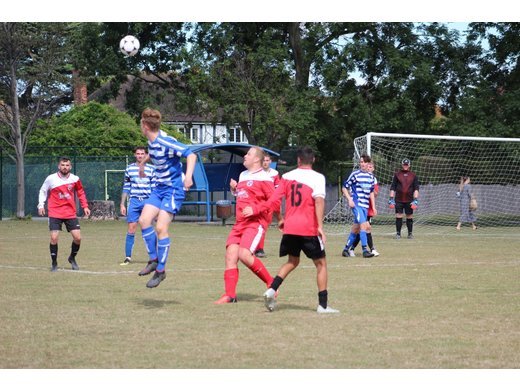 Biddenden warmed up ahead of the start of the new Sunday League season with a 4-1 midweek friendly victory over Division Three side Pilgrims on Wednesday evening. The 'Den had lost their previous three pre-season fixtures, all to Division Two opposition including Appledore, Troggs and FC Folkestone, but bounced back with a decent victory of their own with two of their goals coming from Harry Lambourn, while James Solly and Kieran Harms also found the back of the net to complete the scoring.

Meanwhile, Division Three side Folkestone United Reserves were also in midweek action as they drew 3-3 against newly formed Ashford Saturday League side Sellindge FC at Swan Lane. United went ahead through first team player-manager Danny Clark with an effort from outside the penalty area before last season's top goal scorer Ashley Sales doubled their advantage before the break. Sellindge hit back though and drew level scoring two goals in quick succession at the start of the second half only for United to regain the lead when Sales put an opposition defender under pressure forcing an own-goal. Sellindge came back again to equalise for a second time to claim a draw towards the end of the game to deny Folkestone victory in the end.