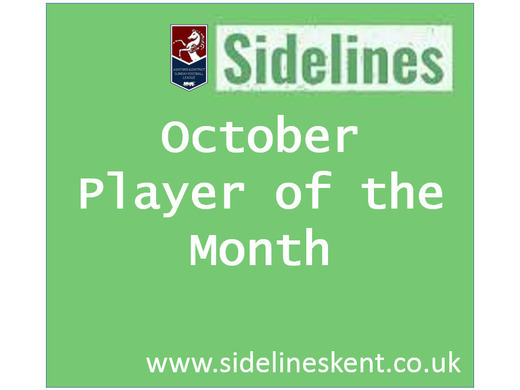 October Player of the Month- Sponsored by Sidelines Kent

With us taking what is hopefully only a temporary break from football this month, it's time to look back over the last few weeks and recognise October's player of the month for each of the four divisions (*October player of the month includes all fixtures played in October as well as on 1st November before the lock down was introduced).

After taking time to adjust to life in the top division at the start of the new season, Premier Division newcomers Sandgate Saint-Germain enjoyed a fruitful October picking up seven league points from three fixtures with influential forward Michael Yianni impressing for the Folkestone-based side. The former Hythe Town and Folkestone Invicta player wins the Premier Division player of the month award after scoring seven goals in four games for Sandgate to help his side move up to second place in the standings, scoring in each of his four appearances in October including a hat-trick in their 6-2 home league victory against Red Heathens. Yianni also found the back of the net in the reverse fixture against the same opposition and in the Bodkin Cup defeat to Charing, before grabbing a brace in Sandgate's 3-3 draw against Market Hotel.

The Division One player of the month goes to another goal scorer who enjoyed a prolific month in front of goal. Sellindge forward Liam Middleton wins the prize having already scored 13 goals for the Swans this season, eight of which came in October as unbeaten Sellindge moved to the top of the Division One league table. The Canterbury City winger claimed the match ball netting a hat-trick as Sellindge beat South Willesborough 4-2 at the start of the month, before getting on the score sheet again the following week in his sides 7-2 victory against local rivals Folkestone United. Middleton then banged in two more goals in their 3-3 draw against neighbours Horsebox Bars before ending the month with another brace in Sellindge's 6-1 away win at promotion rivals Cheriton AFC.

Hythe Athletic forward Sam Puxley wins the Division Two player of the month award as his goals continue to help his side challenge for an immediate return to Division One following relegation last term. Hythe may have surrendered their unbeaten start to the season last month, but Puxley's form in front of goal has helped the Shepway side to three league victories in October and keep them in contention as they sit second behind early leaders Troggs at the top of the standings. The fox in the box scored twice in Athletic's 3-0 home victory over Burton Grove and added another two goals to his ever-growing account in their 4-1 win against Park Farm Rangers. Puxley, who has only recently returned to the game after a couple of seasons out, scored his fifth goal of the month in Hythe's trip to Fox Sunday despite ending up on the losing side in a 2-1 defeat.

Exciting Lolzors midfielder Camara Mamadouba wins the Division Three player of the month after helping the Pumas to two victories from two games in October. Mamadouba has impressed for Justin Day's side in the early stages of the season with some standout performances recognised by several opposition managers, and arrived at the club joining newly appointed boss Day who also coaches the talented midfielder in his assistant manager role at SCEFL side Lydd Town. Mamadouba scored a hat-trick and claimed the man of the match award as Lolzors thrashed Ashford Dynamo 8-0, and was also influential in their 4-0 Sheber Trophy victory against FC Folkestone earlier in the month.