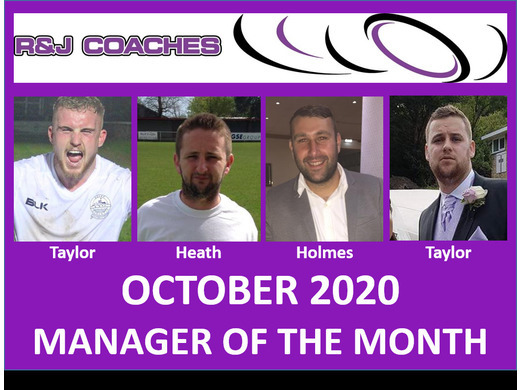 Fingers crossed and able to ensure the safety of our players, officials and supporters we could be back playing football again in two-weeks’ time. But for now, it’s time to look back and recognise October’s manager of the month winners for each of the four divisions (*October manager of the month includes all fixtures played in October as well as on 1st November before the lockdown was introduced).

Ashford Genclik have enjoyed a great start to the new season following promotion last term with new manager Bobby-Joe Taylor rewarded for his efforts being named Premier Division manager of the month for October. Taylor joined the club over the summer to join up with founder and secretary Emin Yalcin for their second season, and guided Genclik to three victories last month as they moved up to fourth place in the Premier Division league table.
Despite a 4-3 league defeat in a thrilling away clash at AFC Locomotive at the start of the month, Genclik bounced back recording three successive wins starting with the 11-0 thrashing of Division One side Lydd Grasshoppers to progress to the quarter finals of the Bodkin Cup. That was followed up with a 2-0 home league victory against a stubborn Aldington side before a 6-2 home win against Mersham Sports Club just before lockdown.

Sellindge player-manager Michael Heath is named Division One manager of the month following an unbeaten October. Sellindge picked up ten points from their four league fixtures last month as Heath and assistant Francis Gallagher guided the Swans back to the top of the league standings scoring 20 league goals in six-hours of football.

The month started off well with a 4-2 home win against South Willesborough, before Tony Dunham’s five goal haul helped the Swans to a 7-2 victory at local rivals Folkestone United. Another local derby saw Sellindge claim an important point in their 3-3 draw against Horsebox Bars before ending last month with another victory beating Cheriton AFC 6-1 away from home.

Chris Holmes scoops the Division Two manager of the month prize after leading league newcomers Egerton to four wins and a draw from their five fixtures last month. Egerton started the season slowly losing their first three league and cup fixtures but have since won their last four games to move up to third in the Division Two table to get their promotion campaign back on track.

The villagers started the month with an entertaining 5-5 draw against FC Folkestone but finally got their first win of the season the following week thrashing Ashford Spartans 9-1 with strike pairing Matt Moon and Bradley Freund both netting hat-tricks. Holmes, with Mike Smith and Sam Head assisting him, then scored seven goals in both of their next two home league games beating Burton Grove 7-3 and promotion rivals Appledore 7-0, before completing the month with a hard fought 3-2 victory against Hythe Athletic.

The Division Three manager of the month award goes to Folkestone United Reserves gaffer Carl Taylor. United ended October unbeaten from their four fixtures to progress to the quarter finals of the Sheber Trophy and move up to second place in the Division Three standings.

The standout result was their 4-3 away win at Division Two side Appledore in the Sheber Trophy as Tom Etherington’s brace helped United reach the last-eight of the competition. In the bread and butter of the league Folkestone beat Singleton Barn 2-1 before putting five past Waterside to collect another three points in their 5-1 away win and ended the month with a point drawing 1-1 at home to Mersham Sports Reserves.