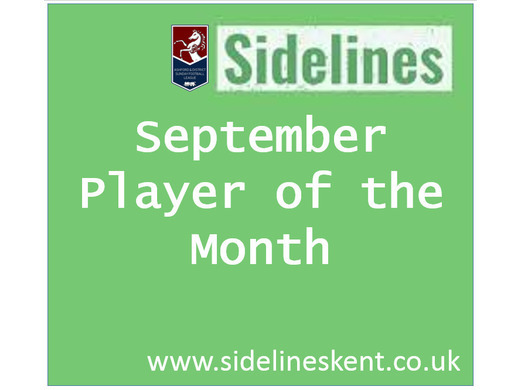 September Player of the Month- Sponsored by Sidelines Kent

Young Aldington goalkeeper Lewis Briggs wins the first Premier Division player of the month award for the new season after impressing for newly promoted side Aldington in September. The teenage 'keeper replaced the long-serving James Sutton between the sticks over the summer, and his performances for Paul Guest's side have in the opening weeks of the season have been impressive to say the least. Although Aldington lost 4-0 at home to local rivals on the opening weekend, Briggs was outstanding for the villagers to keep the score down and he stood out again the following week as they returned from their trip to league newcomers Sandgate Saint-Germain 4-2 winners, again largely thanks to the heroics of Briggs in the Aldington goal.

In Division One, the September player of the month prize goes to Albion defender Jake North who has been pivotal in their 100% winning start to the new season. The former Kennington, Hamstreet and Ashford Cavaliers player has been in great form for the pub side so far this season scoring once in three appearances last month as the Albion picked up a maximum six league points and progressed in the Bodkin Cup. North starred in the opening weekend win against Cheriton AFC, before scoring an outstanding strike and being named man of the match in their 5-0 league victory against Lydd Grasshoppers the following week.

Appledore forward Gabriel Madalin Anghel scoops the player of the month award for September in Division Two after hitting the ground running at the start of the new season. The Romanian-born player scored five goals in three games last month to help the Smugglers to two victories from their opening three games this season, including a hat-trick in their opening weekend 7-2 victory against Fox Sunday. Two-weeks later he found the back of the net twice more as Appledore beat Egerton 5-2 in their Sheber Trophy first round fixture.

The Division Three player of the month for September goes to Lolzors young forward Nathan Boxall who scored two goals from three appearances last month. The former Wye youth player has started the season brilliantly for Justin Day's side and opened his goal account for the campaign as he hit the back of the net in the Pumas 3-2 away win at Folkestone United Reserves on the opening weekend. The following Sunday he scored again as Lolzors made it two league wins from two games beating Mersham Sports Club Reserves 2-0.