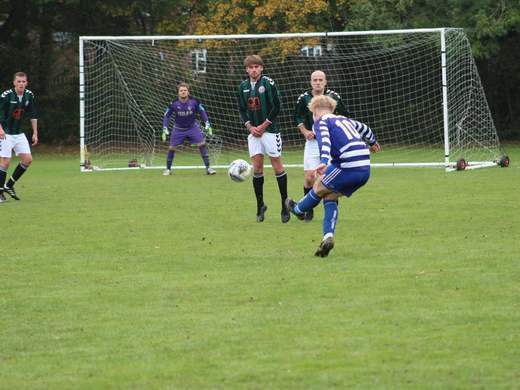 Division One side Albion brilliantly recovered from going two goals behind early on in their Bodkin Cup second round clash against Premier Division leaders AFC Locomotive to run out 5-4 winners to claim a massive scalp. Andy Ward grabbed the winning goal late on to send the Albion through to the quarter finals knocking out one of the favourites to win the competition and maintain the pub sides 100% winning start to the season.
Loco raced into an early 2-0 lead thanks to Luke Burdon’s first minute strike and a penalty converted by Pat Kingwell after a handball in the box. But the game then turned in Albion’s favour as they scored three times before the end of the first half to go in at the interval 3-2 ahead. First player-manager Robbie Greenfield pulled a goal back from the penalty spot before two quick-fire Sam Conlon strikes saw the game swing in Albion’s favour going into the break. Mark Howells added a fourth for the visitors but Locomotive hit back to level the game up again as first Carlum Macleod found the back of the net before Jamie Hurst equalised with a fantastic free kick to make it 4-4. With the game heading to the lottery of penalties, Andy Ward popped up to grab the winning goal and seal a memorable win for the Albion.

Completing the quarter final line up are 18-times winners Market Hotel who comfortably beat Premier Division rivals Mersham Sports Club 7-1. Returning forward Ryan Philpott claimed the match ball scoring a hat-trick for the visitors as Market stepped up the pressure in the second half scoring five times to progress to the last-eight of the competition. Ryan Taylor added two more goals, while Harry Goddard and debutant Josh Hastings completed the scoring to cancel out Matt Stevens goal for Mersham.

Pilgrims were one of four Division Three teams to defeat and knock out higher division opposition as they returned from their trip to AFC Guildhall 3-1 winners to progress to the quarter finals of the Sheber Trophy. Goals from Xavier Marshall, Bradley Humphrey and an Aaren Carlton penalty did the damage to dump their Division Two hosts out of the competition as unlucky Guildhall continue their poor start to the campaign despite Steven Masters grabbing his fifth goal of the season.

Folkestone United Reserves staged a remarkable comeback to knock out Division Two side Appledore coming back from 3-0 down to go through 4-3 winners. Appledore were 2-0 ahead at the break thanks to goals from Rhys Hodges and player-manager Aaron Slann, and added a third goal early in the second half when Bradley Osborne beat three defenders on a mazy run before chipping the ball over United goalkeeper Josh Allon. But United hit back as Tom Etherington scored twice, the second goal from the penalty spot, before Ashley Sales followed up after his original effort came back off the upright to equalise and Jordan Burton grabbed an all-important winner five minutes from time with a neat finish.

Bromley Green also got one over higher division opponents as they beat Ashford Spartans 3-0 at Sandyacres. Bradley Taffurelli scored twice for the Green as they ensured their name goes into the hat for the quarter final draw, while Luke Couper added a third for the hosts to seal the victory.

Two goals from Aiden Bourne helped unbeaten Division Three side Lolzors comfortably see off Division Two visitors FC Folkestone as the Pumas won 4-0 in their second-round clash. Bourne’s brace was accompanied by individuals strikes from Saul Persad and Abib Koke as Justin Day’s side eased into the last-eight with their second victory over a team playing in a higher division in the competition this season.

Ashford United Thirds avoided a potential banana skin as they came away from their trip to Singleton Barn 3-0 winners. United have started strongly in Division Two this season and kept their quest for silverware alive thanks to goals from Alfie Dryland, Kris Melachrino and Sam Wood while goalkeeper Jon Philo recorded his second clean sheet of the campaign.

Ben Allen continued his prolific form in front of goal with a brace as Troggs saw off neighbours Biddenden winning 3-1 (pictured above). The two rivals are only separated by 4 miles, and the game was switched at the last minute to Troggs’ home patch which the Smarden side took full advantage of playing at home rather than on the 3G surface at Tenterden where Biddenden usually play. Allen now has 12 goals for the season in all competitions thanks to his two strikes, while Liam Austen added a third for Tim Archer’s side to cancel out Morgan Waite’s reply for 2019 runners-up Biddenden who crash out.

Park Farm Rangers also safely go through to the last-eight as they just got the better of Division Three form side Ashford Dynamo winning 1-0. Joe Ogunbiyi scored the only goal of the game to settle the tie as Dynamo tasted defeat for the first time this season and unable to beat veteran goalkeeper Ryan Hadley between the Rangers sticks.

Ollie Gray scored two goals as Charing Reserves complete the quarter final line up after beating fellow Division Three rivals Waterside 3-2. Charing Reserves are now the lowest placed team left in the competition following their second victory this season in all competitions, winning this encounter thanks to Gray’s brace and a goal from Ross Bampton to cancel out strikes from Wayne Everest and Maxwell Virani for Waterside.

Michael Yianni netted a hat-trick as Sangdate completed an early season home and away double over bottom of the table Red Heathens winning 6-2 at the Stadium. The win moves Sandgate to within three points of Premier Division leaders AFC Locomotive with their third league victory of the season which keeps their title ambitions alive thanks to Yianni’s prolific form in front of goal. Further goals from Damien Abel, Craig Maxwell and Kieran Byrne sealed the victory as Red Heathens slipped to their fifth consecutive league defeat despite goals from Ritchie Davies and Liam James.

Ten-man Aldington battled back to earn a valuable point as they held Stanhope & Beaver Rangers to a 1-1 draw at the Reynolds Ground. Lewis Bagshaw had given Stanhope the lead after 20 minutes from the penalty spot and the morning got worse for Aldington as defender Sean Halls was red carded leaving the hosts to play a man short for the remaining final hour of the game. But despite playing a man short Aldington heroically took the game to Stanhope with both Alex Williams and Jack Price testing visiting goalkeeper Dan Noden. Paul Guest’s side dramatically levelled with 15 minutes left to play when Noden did well to parry Price’s headed effort before Stuart Taylor followed up to net on the rebound and deservedly earn his side a share of the points.

Division One leaders Sellindge dropped their first points of the new season as they were held to a 3-3 draw by local rivals Horsebox Bars in an entertaining clash at Swan Lane. Two goals from Liam Middleton and one from midfielder Pete Sikora looked to have sealed a fifth victory of the season for the Swans, but Horsebox hit back to claim only their second point of the campaign thanks to strikes from Ashley Boyd, James Nuttall and Keelam Hobbs to level up the game.

Charing closed the gap between themselves and first place to just one point with a game in hand as they returned from their trip to South Willesborough 3-2 winners. The ‘Ring have now won all four league fixtures this season and went 1-0 ahead thanks to Josh Hatcher’s first half penalty only for Lewis O’Leary to level things up for the home side. Brett Hamer restored Charing’s lead to make it 2-1 with a great strike from the edge of the penalty area before Sean Wallis added a third in the second period to put some daylight between the two sides. Gary Blunden pulled a late penalty back for the Frogs, but Charing held on for another important three points and maintain their 100% winning start.

Ben Ashton claimed the match ball scoring a hat-trick as Cheriton AFC moved up to third in the standings with a comfortable 6-0 home victory against Lydd Grasshoppers. Ashton scored his 67th goal for the club on completion of his treble, and his eighth this season, as Cheriton picked up a league high third clean sheet of the campaign, more than they had previously managed before this season in their four-year history. Teddy Easthope added two more with Jamie White scoring the sixth to cap off an excellent mornings work for Trevor Allen and Chris Jones’ side.

Folkestone United finally got off the mark with their first victory of the season as they just got the better of Golden Arrow winning 2-1. Goals from Dan Arnold and Adam Brown ended their five-game losing streak and cancelled out Jake Brazier’s strike for Golden Arrow who remain in sixth place with their second defeat of the season.

League newcomers Egerton moved up to third place in the Division Two league standings as they beat Burton Grove 7-3 in a ten-goal thriller at Rock Hill Road. Striker Bradley Freund netted a second hat-trick this season as Egerton raced into a 4-0 lead within the first 20 minutes of the game, while two goals from strike partner Justin Howard and single goals from Jack Sullivan and Matthew Wright completed the scoring for the hosts. Burton Grove suffered a second league defeat in a row despite Matt Johnson scoring twice and Barry Wilcox finding the back of the net in reply.

Goals from Callum O’Neill and Jack Brown helped Fox Sunday end league leaders Hythe Athletic’s unbeaten start to the season as they triumphed 2-1 at Sandyacres. O’Neill opened the scoring in the first half before Brown volleyed in Fox’s second ten minutes into the second period, only for Sam Puxley to pull a goal back for Hythe with 20 minutes left to play.

The only game in Division Three saw top beat bottom as ten-man Lydd Town Under-21’s enjoyed their 4-1 home victory against Mersham Sports Club Reserves. Lydd moved above Folkestone United Reserves and Ashford Dynamo into first place following this impressive victory as two goals apiece from Jordan Spann and Division Three top goal scorer Josh Mills sealed all three points for the hosts. Luke Goddard grabbed a consolation goal for Mersham who remain rooted to the foot of the table without a point from their opening three league fixtures this season.