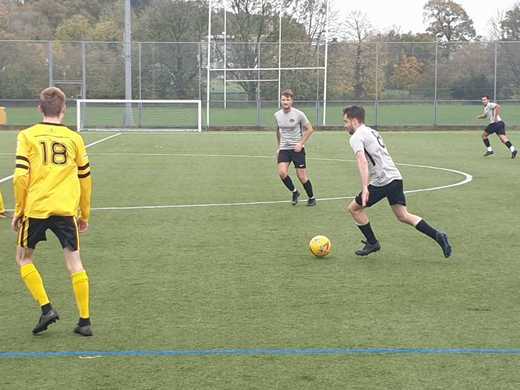 Stanhope & Beaver Rangers eased into the last-eight of the Bodkin Cup with a 5-0 victory over Division One side Hamstreet at Pitchside. Former Bromley Green forward Reece Chapman scored twice for Rangers as the Premier Division side set up an away quarter final tie at Cheriton AFC, with the scoring being completed courtesy of an own goal and one apiece from Kallum Handy and top goal scorer Lewis Bagshaw.

James Haylock-Ashdown claimed two goals as Ashford Genclik closed the gap between themselves and the top-three at the summit of the Premier Division league standings with a 6-2 home win against Mersham Sports Club. Mersham took the lead through Dan James but Genclik recovered to go in 3-1 ahead at half time thanks to first half strikes from Matt Lightfoot, Dion Orris and Haylock-Ashdown. Genclik added a fourth early in the second period when Haylock-Ashdown rounded visiting goalkeeper James Atkins before tapping home, before Declan Driscoll and man of the match Emin Yalcin found the back of the net to seal the victory, despite Matthew Dray’s late consolation for Mersham.

Golden Arrow came back from going behind twice to bounce back 5-4 winners in a nine-goal thriller at home to neighbours and local rivals Cheriton AFC in Division One. The Arrow’s never threw in the towel in a hugely entertaining game as two goals from Jack Moran, an own goal, and one apiece from Ashley Easton and Stuart Thompson saw the hosts hang on to claim a second league victory of the season. Cheriton, who led at 1-0 and 2-1 in the first half, replied with Ben Ashton scoring a brace while Ryan Hall and Teddy Easthope both scored once.

Gabriel Madalin Anghel scored four times as Appledore came back from going a goal behind to eventually run out 7-3 winners away at previously unbeaten Ashford United Thirds in Division Two. The Romanian striker was almost unplayable at times leading the line for the Smugglers as he took his goal tally for the season to nine in all competitions with his four-goal haul at Homelands Stadium. Appledore added to their lead with goals from Bradley Osborne, Callum Howland and former United forward Rhys Hodges against his previous club, while Jordan Boorer netted a consolation hat trick for the hosts who remain in fourth place with nine points from their opening four fixtures.

Egerton continued their recent good form making an excellent comeback to beat promotion rivals Hythe Athletic 3-2 at Rock Hill Road. The villagers have won four successive home games in as many weekends scoring an incredible 26 goals in that period but faced an uphill struggle as Hythe went 2-0 ahead in the first half thanks to goals from Jace Dempster and Chris Philpott. But two goals from much-travelled striker Matt Moon and one from midfielder Jack Sullivan saw Egerton recover to snatch the win and move to within two points of leaders Troggs.

Charing Reserves picked up their second win of the season beating bottom of the table Mersham Sports Club Reserves 3-2 away from home. Top scorer Ollie Gray grabbed a brace for Charing adding to James Collins’ strike to help Neil Thomas’ side move up two places in the table to seventh position. Mersham, who have now failed to win any of their first five league fixtures scoring just four goals in the process, replied with their strikes coming from Adam Bellman and Bradly Webber.