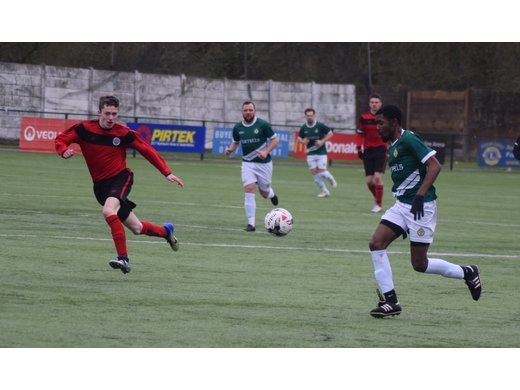 
Kevin Ruane scored twice in the second half to help send Aldington into the final of the Val Helen League Cup as they come from behind to beat Folkestone United 2-1 at the Reynolds Ground. Paul Guest’s side will face one of Lydd Grasshoppers, Horsebox Bars or Sellindge SSC in the final after Ruane’s brace saw Aldington recover from going a goal behind in difficult windy conditions.

After a goalless first half, Folkestone took the lead in the 55th minute when the ball fell to Reece Mooring after a corner and the midfielder hit the back of the net to grab the game’s opening goal to put the visitors ahead. But Aldington levelled from the penalty spot soon after when Tom Missing’s headed effort was handled on the line by United’s Kane Mumford resulting in a red card for the away defender, and Ruane duly stepped up to make the scores level again from 12-yards. Folkestone battled on with ten-men but were undone by another corner ten minutes from full time as Moon’s set piece was headed home by Ruane and aided by a deflection to put the home side in front for the first time in the game.

Despite going four-weeks without a fixture, Charing showed no sign of a lack of match fitness and continued their excellent form with a 4-2 away victory over Horsebox Bars in their Division One clash. The villagers have won five league fixtures on the bounce since the turn of November, and made it six wins in their last seven games to help their bid for a top-half finish this season, an incredible feat having lost each of their first five matches at the start of the campaign.

Recent signing Lewis Bagshaw scored twice to take his goal tally to six for the season since re-joining the club before Christmas, while further goals from James Fraser and Luca Fasoli ensured Charing returned up the A20 with all three points. Horsebox had both Liam Quigley and James Nuttall on target but fell to their third successive league defeat and remain fifth in the league standings.

Park Farm Rangers beat promotion rivals Troggs 2-1 at the Towers School to earn three important points at the top of the Division Two league table. A brace from Sean Kelleher saw Rangers register a fourth league victory in their previous five fixtures to move to within just one point of league leaders Hamstreet and go above their opponents in the process. Liam Austen’s wind-assisted goal pulled one back for Troggs who drop to third in the standings with a second successive league defeat.

Another team who strengthened their promotion bid was Biddenden who also grabbed a 2-1 victory beating bottom of the table Fox Sunday. Goals from Harry Lambourne and Jordan Swain did the damage to recover after going a goal behind in the first half when Kai Jones opened the scoring for Fox. The win for Biddenden saw them rise three places in the table to fourth, while Fox remain rooted to the foot of the standings four points adrift of tenth place Burton Grove.