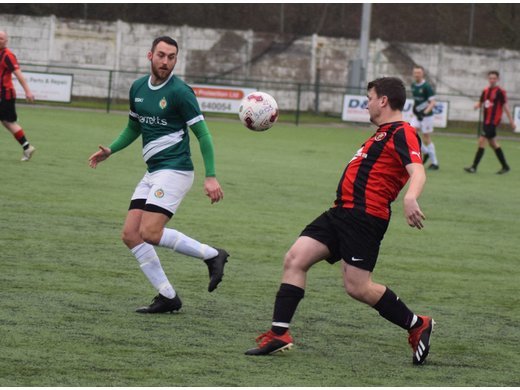 South Willesborough booked their place in the semi finals of the Kent Sunday Junior Trophy thanks to a heroic 2-1 away victory at Sheerness East. The Frogs Islanders continued their incredible cup record with arguably the biggest result in the clubs short history thanks to first half goals from Jordan Horne and Tommy Wadman to record their twelfth cup victory of the season, a feat even more incredible as Brad Horne’s side lost all four of their cup fixtures last season without winning a single tie.

With Storm Dennis hitting Sheppey and creating difficult playing conditions both teams struggled to get a hold on the game in their opening half hour until South Willesborough took the lead in the 37th minute. Forward Jordan Horne burst clear of the Sheerness defence and got a low shot in at goal from the edge of the penalty area that cannoned in off the upright before hitting the back of the net to make it 1-0 to the Ashford side.

Five minutes later South Willesborough doubled their lead to go in at half time two goals to the good when former Prince Albert forward Wadman netted his sixth goal of the campaign. Man of the match Josh Ahmed won the ball back on the halfway line and played in Lewis O’Leary who then drove with the ball at the home defence before crossing into the box from the left. His intended target Mike Norris brought the ball under control but was fouled from behind, and before the referee could award any foul Wadman followed up to slot the ball home to make it 2-0.

The second half started off a scrappy affair until Sheerness East pulled a goal back from a corner in the 65th minute, but despite a narrow lead South Willesborough always looked good for the victory and were unlucky not to add to their tally only for the home goalkeeper to make excellent saves from both O’Leary and Dion Fitzgerald late on. The final whistle sparked jubilant scenes as the Division Two side are now just 90 minutes away from becoming the first Ashford Sunday League team to reach the final in the competition’s history.

Ashford Genclik bounced back from last weekend’s defeat against Cheriton with a 6-2 home win over Hythe Royal British Legion to strengthen their promotion bid. Although the victory for Genclik keeps them in third place in the Division One league table, they moved to within just one point of both Sellindge SSC and Aldington who occupy the top two positions with just a third of the season left to play.

Yalcin Guven and recent signing Joe Mant both scored twice for the hosts adding to individual strikes from Max Sarigul and Scott Bradley to record Genclik’s eighth league victory in their previous nine outings. For Hythe they remain second from bottom at the foot of the table just three points ahead of relegation rivals Appledore and had Michael Andrews and Jason Brazier on target.

The impressive Craig Hagley scored twice as Ashford United Thirds left it late to earn three important points with a 6-0 victory over Aldington Reserves at Homelands Stadium (pictured above). United scored all six of their goals in the final 25 minutes of the game to move to within six-points of Division Three leaders Folkestone United Reserves with two games in-hand. Hagley’s brace and additional goals from Rhys Hodges, Nathan Cook, Benn Phillips and Tom McDonald sealed a late flurry of goals as United won for the third time in their previous four games to keep their title ambitions alive.