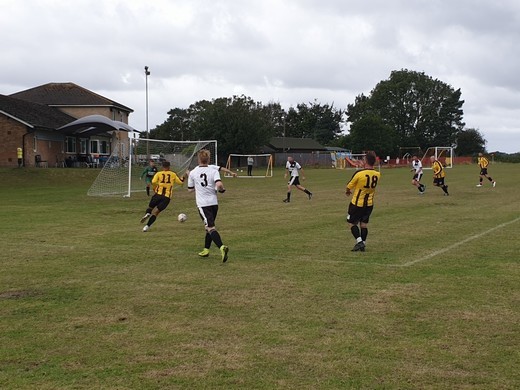 Premier Division newcomers Sandgate Saint-Germain demonstrated the strength of their squad ahead of the new season as an excellent second-half performance saw them beat hosts Sellindge SSC 9-1 at Swan Lane. The two Shepway rivals were tied at a goal apiece at half time as Kieran Byrne gave Sandgate the lead before Tony Dunham levelled for the Swans with a well taken strike. Former Ashford United forward Byrne then completed his hat-trick at the start of the second-half adding three more goals to put Sandgate 4-1 ahead before striker Craig Maxwell netted a treble of his own to put the visitors further ahead. Further goals from the impressive Billy Somerville and Wesley Blaskett-Foord rounded off an emphatic win for Jamie Pickering's side who open their league campaign in two-weeks time away at Brewmaster.

The Brews enjoyed a victory of their own as they welcomed in-form Appledore to Hopes Grove recording a 2-1 victory thanks to goals from Gary Mickelborough and Charlie Sharp, but Premier Division rivals Red Heathens suffered a defeat to lower division opposition as strikes from Josh Hatcher and James Fraser helped Division One Charing to a 2-0 win under the guidance of new manager Lee Woods.

Second-half goals from Richard Boakes and Matt Jarvis saw Division Three side Ashford Dynamo get the better of hosts Aldington winning 2-0 at the Reynolds Ground. Dynamo took the lead when Boakes' effort took a deflection off Aldington defender Tom Missing to deceive home goalkeeper Lewis Briggs, and Brad Sharpe's side doubled their advantage soon after when Jarvis converted from Calvin Smith's cross to seal a morale boosting victory for the Royal Blues.

Substitute Craig Clifford made an instant impact coming off the bench scoring a hat-trick as South Willesborough warmed up for their new adventure in Division One this season with a 6-0 victory on their road trip to play Centre Spot. Clifford scored three goals in the space of 20 minutes against their Dover Sunday League opponents as the Frogs romped home to another pre-season victory with Jacob Horne weighing in with two more goals adding to Lewis O'Leary's individual effort, Thomas Moon with another clean sheet in goal for South Willesborough.

Albion FC, newly elected to Division One ahead of the new season, recovered from going a goal behind inside the first 30 seconds to recover and beat Park Farm Rangers 6-2 away from home. Striker Sam Conlon claimed the match ball netting three times for the pub side while further goals from Harry Greenfield, Matt Hart and a penalty from Andy Ward sealed the victory for Tad Greenfield's new side. Elsewhere Aaren Carlton netted as Pilgrims came away from their trip to Division Two side Troggs with a decent 1-1 draw while goals from Olinto Santo and Aiden Bourne helped Lolzors to a 2-0 away victory at Lydd Town under-21s at the Lindsay Ground.

Folkestone United will be hoping to build on their decent debut season in the league last season and continued their pre-season friendly preparations with a 2-0 home victory against newly elected Golden Arrow. Danny Clark put United ahead finishing off a well worked team goal before half-time, before Kane Mumford scored the second with five minutes to go. Burton Grove enjoyed a run out against their own 'legends XI' losing 5-3. Two goals from Jurgen Ahmetaj and one from Jean Claude Cothias were not enough to avoid defeat as the legends claimed the bragging rights for another year thanks to two goals apiece from Chris Gillam and Matt Kirby and a further strike from Barry Pithers.

Hythe Athletic continued their impressive pre-season form with a 3-1 home victory against Singleton Barn. Athletic were relegated from Division One over the summer and look to be building a side capable of an immediate return and got off to a great start when Jace Dempster gave them the lead with a headed effort from a corner. Further goals from James Sherwood and Charlie Partridge wrapped up the victory as they took another step closer to their league opener away at Burton Grove on the 13th September. Finally, Tom Wilkes scored both goals as Ashford Spartans were held to a 2-2 draw in their annual season curtain raiser against Dover Sunday League side Shepherdswell Spartans.