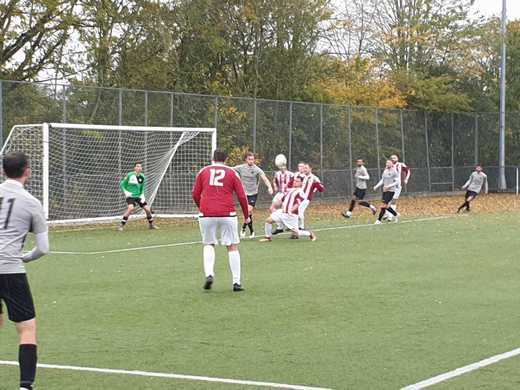 Market Hotel came back from going behind three times to rescue a draw and return from their trip to Shepway with a point in their 3-3 draw away at Sandgate Saint-Germain. The result lifts Market up one place to seventh in the Premier Division table while Sandgate extended their unbeaten league run to four games and move up to second place, just two points behind league leaders AFC Locomotive who they face next weekend.

Sandgate took the lead when top goal scorer Michael Yianni followed up after his penalty kick was saved to score on the rebound, but recent signing Josh Hastings soon levelled for the visitors with his second goal in as many games for Liam Smith’s side. The home side regained the lead soon after with Yianni scoring again to net his eleventh goal of the season, but again Market hit back as Charlie Fitzgerald got off the mark for the season to make it 2-2. Sandgate thought they had secured all three points when Billy Sommerville finished well after Market’s high defensive line lost possession, but Bradley Baker ensured that Market claimed a share of the points as his powerful effort found the back of the net to score the visitors third goal of the morning.

A goal either side of half time saw Ashford Genclik pick up their second league victory of the season as they beat Aldington 2-0 at the Towers School. Genclik were dominant against an injury-hit Aldington side and could have been well and truly clear had it not been for some outstanding saves from young goalkeeper Lewis Briggs in the visitors goal, but Briggs was helpless to keep out James Haylock-Ashdown’s opener just before the break. Genclik doubled their lead at the start of the second period when Matt Lightfoot latched onto a brilliant through ball before lifting the ball over the advancing Briggs to make it 2-0 and secure a deserved victory to move up to fourth in the standings.

Josh McCue netted a hat trick as Division One leaders Sellindge came back from going a goal behind to beat Cheriton AFC 6-1. Craig Harding had given hosts Cheriton a 1-0 lead as Trevor Allen’s team looked the better of the two sides in the opening 20 minutes, but Sellindge hit back to extend their unbeaten start to the new season to six league games and move three points clear at the top of the table. McCue’s treble set the Swans on their way while two goals from top scorer Liam Middleton and one from Samuel Cubley completed the comeback for Francis Gallagher’s side.

Charing remain in second spot after they were made to work for a valuable point in their 3-3 draw at home to Horsebox Bars. Charing took the lead when Gavin Prowse headed home from a corner, but the visitors levelled before half time when Ashley Boyd grabbed an equaliser to finish off a well worked team move. Things got worse for the hosts when Boyd scored his second goal of the morning to put Horsebox 2-1 ahead, and skipper James Nuttall extended their lead further scoring with an excellent free kick. But Charing regrouped and hit back with two second half goals of their own to preserve their unbeaten start to the new campaign as first Dan Reynolds got on the score sheet before Morgan Regardsoe netted his third goal of the season to rescue a point and make it 3-3.

The Albion move up to third place and remain the only team in the division still with a 100% winning record as they beat ten-man South Willesborough 3-2 at the Spearpoint. The pub side trailed 2-1 at half-time as Steve Johnson’s first half strike was cancelled out Gary Blunden’s opener for South Willesborough, before stand-in goalkeeper Mike Norris restored the lead for the Frogs scoring direct from a drop kick that sailed some 70-yards before bouncing over Albion goalkeeper Ben Stevens’ head and into the back of the net. Norris’ freak goal had given South Willesborough hope after regular number one Thomas Moon was only minutes earlier shown a second yellow card and sent off having previously saved a penalty from Albion’s Sam Conlon on an eventful first half. Debutant forward Gary Lockyer came off the bench to level for the Albion after he was played in by Dan Scorer, before Lewis Horne’s diagonal ball was headed back across goal by Conlon for Johnson to score his second and Albion’s third goal to seal a thrilling victory.

Dane Rollings scored twice as bottom of the table Hamstreet returned from their five-week break to earn their first point of the season in a 3-3 draw at home to Golden Arrow. New ‘Street manager Dave Bass has spent the previous month recruiting and adding to the squad following the departure of previous boss Mark Rutland, and Rollings’ brace and a goal from former Charing midfielder Ben Harte ensured the hosts secured a positive result despite Golden Arrow hitting back with goals from Jake Brazier, Jack Moran and player-manager Ashley Easton.

Troggs moved back to the top of the Division Two league standings on goal difference as they triumphed in a twelve-goal thriller at Cornes Meadow beating FC Folkestone 9-3. Tim Archer’s side maintained their 100% winning start to the new season winning their fifth consecutive league fixture as top goal scorer Ben Allen was once again heavily involved netting twice to take his goal tally for the season to 14 in all competitions. Summer signing Harry Stow and long-serving midfielder James Carlton also scored twice for the hosts while individual goals from Barney Burton, Liam Austen and Dominic Hatley completed the scoring cancelling out strikes from Kyle Allman, Alex Rumsey and Zobie Wratten for the visitors.

Hot on their heels still are Hythe Athletic who bounced back from last week’s defeat to earn a fifth league victory this season beating Park Farm Rangers 4-1 at South Road. Park Farm went ahead after half an hour when Dan Hall scored his first goal of the season, but Hythe went in at the interval all-square again thanks to Tom Moon’s headed effort to make it 1-1. Rangers were reduced to ten men for the final thirty minutes and Hythe took full advantage of the extra player taking the lead for the first time in the game thanks to Jace Dempster’s goal midway through the second period, and the turnaround was complete as top goal scorer Sam Puxley scored twice late on to wrap up the game and continue Hythe’s decent start to the campaign.

Egerton are up to a season-high of third place as they won their third game in a row thrashing Appledore 7-0 in a game switched to Rock Hill Road due to a waterlogged pitch down in Appledore. Bradley Freund scored yet another hat trick for the hosts, his third in as many games, to lead the way but star of the game was Egerton’s Joshua Jones who set up and assisted all seven of the home sides goals. Strike partner Matt Moon weighed in with two goals for himself while both Owen Clark and Matthew Wright added to the score as Egerton avenged their 5-2 defeat to the same opposition last month as they exited the Sheber Trophy losing to the Smugglers.

Jordan Boorer and Kris Melachrino both scored twice as Ashford United Thirds recovered from going a goal down to beat Burton Grove 5-1 at Homelands. Birthday boy James Ross gave Burton Grove the lead when he followed up after Matt Johnson’s original effort was only palmed away by United goalkeeper Jon Philo, but Ashford levelled on the stroke of half time thanks to Sean Corps’ penalty. Ashford United stepped up a gear in the second half as Boorer and Melachrino proved the difference scoring twice each to secure a third league victory in as many games for Roger Hadlum’s unbeaten side.

Ashford Spartans remain pointless and bottom of the pile after they were beaten by Biddenden losing 6-2 away from home. Biddenden jumped up five places to fifth in the table after securing only their second victory of the season as Edward Manford-Keen and Morgan Waite both scored twice for the hosts. Further goals from Harry Lambourne and top scorer Kieran Funnell sealed the victory for the ‘Den and cancel out strikes from Stoian Aurel and Stefan Dalton for unlucky Spartans.

Division Three leaders Lydd Town had to settle for a share of the points as they returned from their trip to Sandyacres with a 4-4 draw against Bromley Green. Lydd had four different players get on the score sheet as goals from Kai Harris, Jordan Spann, Samuel Crisford and top scorer Josh Mills ensured they remained top of the pile in their debut season. But the Green stretched their unbeaten run to four games with two goals from Hassan Tejan and a goal apiece from George Mabb and Bradley Taffurelli to continue their recent good form.

Stanley Dickson netted for Folkestone United Reserves as they stay in second place despite being held to a 1-1 draw at home to bottom of the table Mersham Sports Club Reserves. Dickson’s goal was cancelled out by Adam Fairclough as Mersham earned their first point of the campaign after a difficult start to the new season.

Camara Mamadouba was the star as unbeaten Lolzors thrashed promotion rivals Ashford Dynamo 8-0 at home to maintain their 100% winning start to the season. The outstanding Mamadouba scored a hat trick for the Pumas who said goodbye to skipper Luke Ponsford this weekend following the defender’s decision to hang up his boots but marked the occasion in style with a big win. Further goals from Aiden Bourne, Saul Persad, Steve Warren, Nathan Boxall and Jack Teehan completed the one-sided victory.

Singleton Barn moved up to fourth in the standings as they enjoyed a 7-2 home victory against Charing Reserves. Ricky Harden and Ben Bromley both netted twice for the Barn to help secure their third win of the campaign while the scoring was completed with Lee Cannon, Jordan Luckman and Kellen Sharratt also hitting the target. Charing replied with two goals from Ross Bampton and remain down in ninth place following their fourth league defeat of the season.