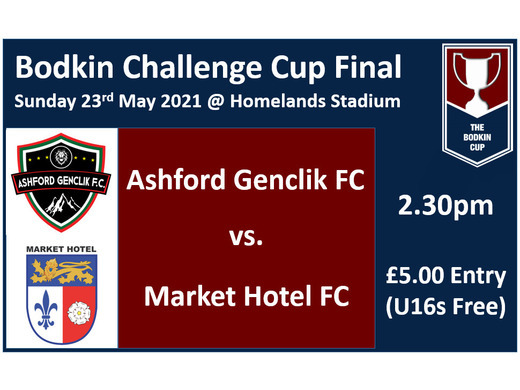 Holders Market Hotel take on debutant finalists Ashford Genclik this Sunday afternoon in the final of the Bodkin Cup at Homelands Stadium with both teams hoping to lift the only piece of silverware available to them in what has been another very stop-start season. With the COVID-19 pandemic prematurely ending a second successive season, Sunday marks the first competitive Ashford & District Sunday Football League final for two-years with a decent crowd expected to be in attendance following the easing of restrictions on supporters in recent weeks.


Market Hotel won the 2019 competition beating Premier Division rivals Brewmaster High Halden 1-0 in the final thanks to long serving midfielder Steve Ward’s winning goal. That victory two-years ago was their 18th competition victory and Market have won the Bodkin Cup more times than any other club in the competitions 60-year history. Ashford Genclik on the other hand will be playing in a competitive final for the first ever time in what is only their third season as members of the league. Last time around in 2020 they reached the quarter finals of the competition before crashing out to then Division One promotion rivals Sellindge losing 7-4 after extra-time, but like Market they topped their group in the opening round this year before going on to win their respective semi final ties last weekend to set up this Sunday’s final showdown at Homelands Stadium.

Market Hotel’s path to the final has seen them win twice and draw once after being drawn into a tough qualifying round group alongside three-times winners Brewmaster, who they drew 3-3 with thanks to Bradley Baker’s hat-trick before going on to earn an important bonus point in the resulting penalty shootout. Previous to that Baker was on the score sheet yet again netting twice as Market comfortably beat Golden Arrow 6-0 in their opening group stage fixture with Harry Goddard adding two more goals along with individual strikes from Ryan Taylor and Ryan Philpott. In the semi finals last weekend goals from Baker, Troy Howard and Ryan Taylor again helped Liam Smith’s side to a 3-1 victory away at AFC Locomotive in front of a large crowd at Pitchside to put them through to the final tie where manager Liam Smith is now aiming for his fifth Bodkin Cup triumph in charge of the club since taking over the reins in 2015.

Opponents Ashford Genclik have impressed many local football followers in the last couple of years with their attacking-style of football and will go into Sunday’s final with confidence having won the only previous meeting between the two teams back in September 2020 when Genclik run out 5-3 winners in the Premier Division before the season was halted due to the second nationwide lockdown. Genclik eased through the group stage winning all three of their qualifying fixtures scoring 22 goals as they beat Red Heathens, Folkestone United and Cheriton AFC before knocking out Sandgate Saint-Germain in the last-four last weekend winning 4-0. Forward Dion Orris has scored an incredible 12 goals from 4 appearances in the competition this season while strike partners Matt Lightfoot and James Haylock-Ashdown have both weighed in with six goals of their own.

Genclik manager Bobby-Joe Taylor and club founder Emin Yalcin have assembled an exciting mix of youth and experience including highly rated goalkeeper Stefan Lawrence and former Ashford United under-23 players Levii Loyza and Matt Kirby, and all eyes will be on them to see if they can upset the most successful side in the leagues history on Sunday.

Kick off is at 2.30pm with admission costing £5.00 (cash only). Entry for children under-16 is free. Spectators will be expected to follow the latest social distance guidelines once inside the stadium.